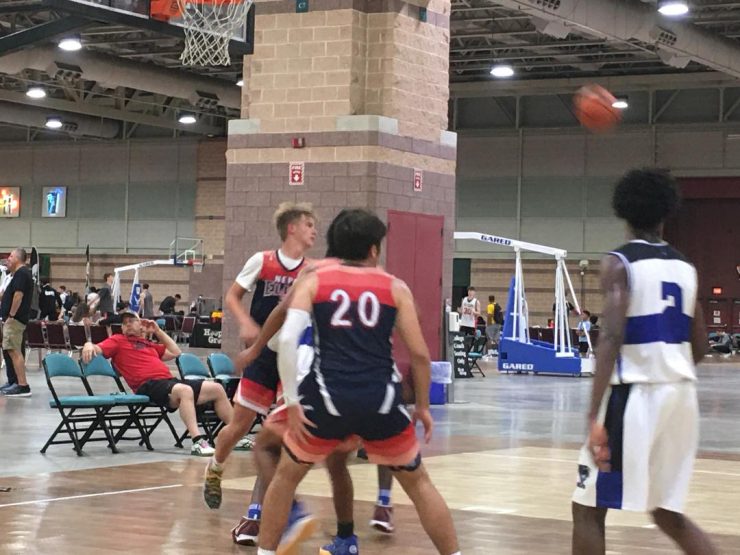 ATLANTIC CITY, N.J. — Desperate and perhaps a little frustrated, the Team Final Black defense finally got to Jason Shields as he was trying to hit a 3-point shot, knocking him to the floor instead of allowing another three points.

Shields, however, simply got up and found another way to produce three points, hitting all three free throws to complete a 28-point performance that sparked a 71-40 rout as the NEPA Elite Coyle 17U boys team wrapped up the Hoop Group’s Atlantic City Jam Fest Friday at the Convention Center.

After going 7-for-8 from beyond the arc – and making his last five tries – Shields agreed with coach Brian Coyle’s assessment from the previous day that the team’s amazing 3-point numbers were a reflection of other things happening on the floor as much as they are about accurate shooting.

“We’re getting stops and playing good defense,” Shields said. “Then, I just rush up the floor, get to my spot and my teammates find me.

Shields and teammates consistently found the bottom of the net.

NEPA Elite shot 12-for-19 (63.2 percent) on 3-pointers in the win to finish 22-for-38 (57.9 percent) over the last two games in Atlantic City before heading to Spooky Nook in Manheim, Lancaster County where the Hoop Group begins its season championships for boys Saturday.

After losing in a showcase game that came down to the final second Wednesday, NEPA Elite won its final three games and was unbeaten champion of the 17U Platinum Division Pool J.

“It was the first game coming down after a four-hour trip,” Shields said of the Wednesday loss. “It’s hard to get right into a groove, but we made some adjustments and I think we’re getting there.”

NEPA Elite outscored opponents by 71 points after falling behind by 14 early Wednesday.

It topped the Thursday night 3-point flurry that had produced a 23-2 start by remaining hot throughout Friday’s game.

Shields made a steal on the left side in the defensive end with just seconds remaining.

While moving up court, Nocito pulled in the lead pass from Shields. He turned and hit a 30-footer, while on the move, just before time expired.

Ethan Meuser added a 3-pointer in the second half when he had 9 of his 16 points.

Nocito had all 14 of his in the first half when Shields was scoring his first 16.

Justice Shoats had nine points and was one of four players with two steals for NEPA Elite, which forced 14 first-half turnovers. Shields, Nocito and Arvel Chandler also had two steals.

Shields and Chandler are high school teammates at Scranton; Shoats and Prociak are from Holy Redeemer and Nocito and Finarelli are from Dallas.

Meuser is a recent Wyoming Seminary graduate, who is headed to The Hill School in Pottstown.

All five NEPA Elite teams are at Spooky Nook for the Summer Jam Fest.

The Miller 16U and Joyce 15U teams get the action started in the two-day event with 9:30 games.

A recap of other two NEPA Elite games from the final day in Atlantic City:

The Wignot 17U team was unable to come up with a win in Atlantic City, but it finished the event strong, putting together a late 9-0 run to pull within two points with 1:43 left before the PA Wolves held on for a 54-51 victory.

NEPA Elite finished 0-3 in the 17U Expressway Division, which was conducted strictly with bracket play.

Trevor Hardy and Josh Williams did their best to try to change that with their inside work.

Hardy, who had converted a rebound for the only NEPA Elite basket during the late Wolves run, kept getting to the boards. He twice tipped in shots, including the basket that made it 53-51.

Josh Williams also scored from close range in the nine-point streak, connecting off an in-bounds pass and at the end of a baseline drive.

Michael Watkins had the other point in the streak, hitting the first of two free throws.

The Miller 16U team also had a comeback fall short while playing in the 16U Parkway Division championship semifinals, which it reached by winning Pool B in a three-way tiebreaker.

NEPA Elite trailed by 16 in the first half, 10 at the break at 13 in the second half, but got the deficit down to as little as 4 before falling to Mount Vernon Elite, 55-49.

Patrick Walsh started bringing the team back with consecutive 3-pointers to end the first half.

Zach Konopke went 6-for-9 from the floor while finishing with 16 points and 8 rebounds.

Honesdale’s Andrew Tucker and Mid Valley’s Josh Angelo led the way June 13 at Abington Heights when the County defeated the City, 87-62, in the boys competition of the first Lackawanna Track and Field Coaches...

Valley View’s District 2 Class 4A championship team leads the way with nine players in the July 20 Dream. The Cougars are part of the County team, which will be coached by Delaware Valley’s Keith Olsommer. Scranton...