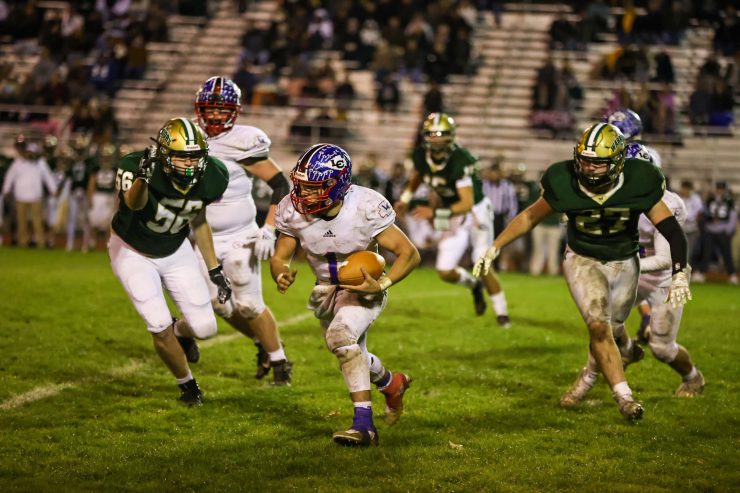 Pictured above: Dominico Spataro runs for Lakeland in a file photo from the 2021 season.

Dominico Spataro produced five touchdowns for the second straight game and Lakeland’s defense provided its first shutout of the season as the Chiefs rolled over host Riverside, 34-0, in a Friday night non-league game between Lackawanna Football Conference teams.

Lakeland, the No. 1 Small School in the Gaughan Auto Store Super Six Power Rankings determined by NEPAFootball.com, is 3-0 and has led by at least 34 points in all three games.

The Chiefs scored the first 33 points in a 41-14 victory over Scranton Prep and opened a 44-point halftime lead in a 52-7 rout of Carbondale.

Spataro hit half his 24 passing attempts for 219 yards and 3 touchdowns while also carrying 11 times for 100 yards and 2 more scores.

Riverside held Lakeland scoreless into the second quarter, but the Chiefs eventually got their offense rolling.

Spataro hit Riley Rovinsky with a 30-yard pass to the 1 and he opened the scoring from there on the next play.

Jon Seamans caught 5 passes for 149 yards and 2 touchdowns. He worked through the defense for a 35-yarder for a 14-0 halftime lead and got open deep for an 80-yarder in the third quarter.

Lacota Dippre also had five catches, including the other touchdown, while leading the team defensively. He had six tackles, including a sack and another for a loss, an assist and an interception that he returned 22 yards.