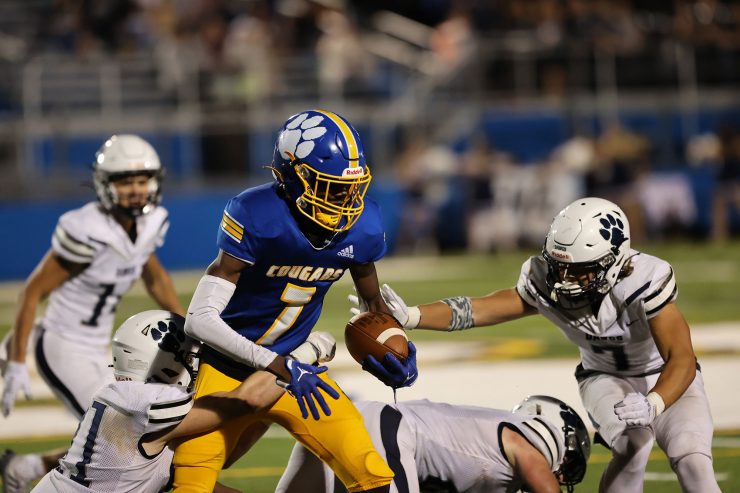 Lost to the emphasis of district qualifying and seeding, divisional races don’t seem to grasp the attention of high school football fans the way they once did.

For those who do follow such things, Friday night and Week Four as a whole present an important step in the football season.

The first games of the Division 1 schedule in the newly aligned Lackawanna Football Conference are on the schedule along with the first Wyoming Valley Conference Division 1 games for four teams, including the division favorite.

Williamsport and Crestwood are both 0-1 in WVC Division 1 with losses to the early leader, Dallas (2-0 in the division, 3-0 overall).

With the other LFC Division 1 opener, Scranton (3-0) vs. Scranton Prep (2-1) scheduled for Saturday afternoon, North Pocono-Valley View is the highlight of the Friday night schedule.

The Trojans and Cougars meet in a rematch of the District 2 Class 4A championship game in which Valley View rolled to the title, 42-7.

It is also the only Friday game between two teams in the Gaughan Auto Store Super Six Power Rankings for LFC and WVC teams, as compiled by our partners at NEPAFootball.com. North Pocono is No. 5 among Big Schools while Valley View is No. 4.

North Pocono has two big losses from which it needs to recover. Dating back to last season, the Trojans have won 11 of their last 14 games and played a one-touchdown game with Delaware Valley in defeat. The other two losses, however, are the season-ending playoff loss at Valley View and last week’s 54-7 demolition by top-ranked Hazleton Area.

Valley View has won two straight since opening the season with a loss at Crestwood.

Taheed Jewell has more than half the team’s catches and two of its three interceptions.

Defending champion Delaware Valley, despite its winless start, is still considered a title contender as it heads into its first game against District 2 competition after taking on a demanding early-season schedule.

Hazleton Area will be looking to continue a start in which it has outscored opponents by a District 2-best margin of 146-29.

Tyler Wolfe has completed 74.3 percent of his passes while throwing for 771 yards and 12 touchdowns; leading receiver Matthew Cusatis has scored five times, including twice on returns; Matthew Buchman has 410 combined rushing and receiving yards; and Qay’von Minor is averaging 11 tackles per game.

They are supported by a line, which includes Sam Porro and his five tackles for losses. That group handled North Pocono up front, allowing the Cougars to dominate last week’s meeting of 2-0 teams.

“The biggest compliment I could give the Lackawanna Football Conference is how physical they are and the brand of football they play,” Hazleton Area coach Dennis Buchman said of the win over North Pocono. “We challenged our guys up front.

“We made it about them and they did a tremendous job.”

Wilkes-Barre Area is playing at home for the second straight week after debuting in its new stadium with a 34-7 win over Wallenpaupack. Mekhi Nelson has rushed for more than 200 yards in two straight games, including last week when he threw a 75-yard touchdown pass for the first touchdown, then ran for the next three Wilkes-Barre Area scores.

Berwick is coming off its first win when defense and special teams made things easy on the offense in a 49-0 rout at Abington Heights.

Wyoming Valley West goes into its divisional opener searching for its offense. The Spartans have struggled running the ball, which was the strength of last season’s team, and were shut out, 22-0, by Pittston Area last week.

Like the LFC, the WVC has new divisional alignments this season.

Nanticoke, Pittston Area and Lake-Lehman all open their WVC Division 2 schedules against teams that have already played games in the division.

After scoring 70 and 53 points in the last two weeks, Holy Redeemer is looking for its first three-game winning streak in school history. Jacob Hunter threw for 350 yards and 6 touchdowns in last week’s win over Tunkhannock.

The teams in the two lower divisions of the LFC continue non-league play with Lakeland and Lackawanna Trail trying to protect perfect records.

Lakeland, the No. 1 Small School team in the Super Six, is home against Susquehanna (1-2).

Dominico Spataro has passed for 567 yards and 10 touchdowns while running for 234 yards and 3 touchdowns for the Chiefs.

No. 5 Small School Lackawanna Trail is at Honesdale (1-2).

Both teams have played well defensively. The Lions have limited opponents to 9 points per game while the Hornets have a shutout to their credit and are giving up 16.7.

The other unbeaten, Dallas, heads to West Scranton (1-2) for a non-league game. The Mountaineers are No. 2 among Big Schools.

Prior to the Riverside-Dunmore game, a statue will be unveiled honoring Jack Henzes, who won a state championship and more than 400 games as head coach of the Bucks for nearly half a century.

There are also other sports on the schedule for District 2 teams.

The Crestwood boys golf team (12-0) can become the first fall team to clinch a division title when it plays at Wilkes-Barre Area (2-8) in a Wyoming Valley Conference Class 3A Division match.

Wyoming Seminary’s field hockey team is in Louisville, Ky. for a noon meeting of 2021 state champions with Villa Duchense from Missouri.

There are also boys soccer games and girls volleyball matches on the schedule.