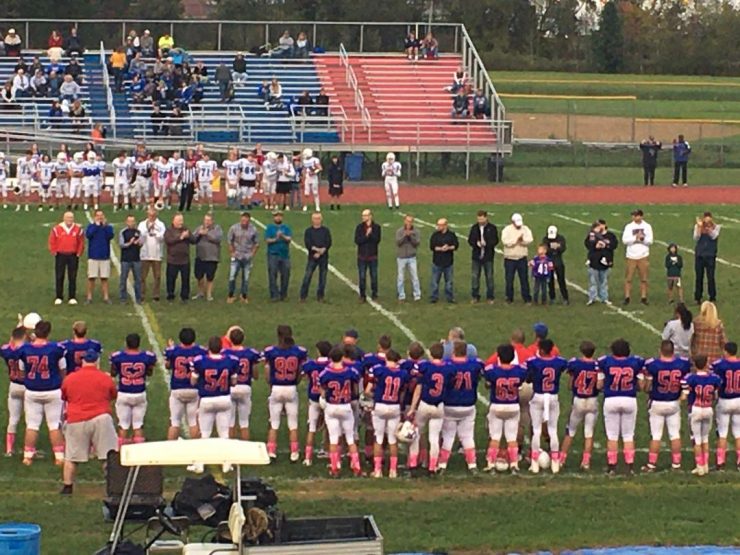 Despite only three carries, he topped that in the second half, running for more than 200.

“Vinny’s the heartbeat of the team,” Carbondale coach Jeff Arthur said. “He had a great night. I’m proud of him.”

With DePalma carrying 16 times for 315 yards and 3 touchdowns while throwing a touchdown pass on his only attempt, Carbondale piled up 524 yards total offense. The Chargers averaged 11½ yards per carry, gaining 448 on 39 attempts on the ground.

The offense was more than enough to offset Jesse DeLousia’s three touchdowns and Susquehanna scoring in every quarter.

DePalma was the clear leader, but Logan Wormuth also had 2 touchdowns of at least 50 yards while Guy Mushow and Devon Reams also scored with some help from DePalma.

When Reams plays tailback, DePalma moves up to play fullback and, on what may have been the game’s most important play, he threw a pass to the quarterback, Mushow, for a touchdown.

“Vincent’s a tough kid,” Arthur said. “He doesn’t mind moving up to fullback and being a blocker. That’s the attitude a kid should have.

DePalma likes what he sees from that team, which bounced back from two straight Division 3 losses to improve to 3-4 overall.

“That shows if we play as a team and start having fun, watch out,” DePalma said. “We try to let the whole team get a touch and let everyone shine.”

After Carbondale honored the past, celebrating the 20th anniversary of its District 2 Class A championship team in pregame ceremonies, DePalma’s runs of 22 and 16 yards set up the newest Charger to shine.

Colin Bailer, a Forest City soccer player added to the team during the week as part of the cooperative sponsorship of the sport between the two schools, kicked a 35-yard field goal with plenty of room to spare on his first play in the new sport. He later showed his left leg is accurate, as well as strong, going 7-for-7 on extra points. Bailer even impressed his new coach by making a tackle while the Chargers were struggling to contain DeLousia and Susquehanna’s other kickoff returners.

The first of those kick returns resulted in an 82-yard DeLousia touchdown.

That gave the Sabers a 6-3 lead before running a play and they appeared ready to get the ball back and try to add to it on their first possession until Carbondale called timeout to reach into the bag of tricks on fourth-and-four from the 18.

In a play designed by athletic director and former head coach Larry Gabriel III, who remains with the team on a volunteer basis, Carbondale snapped the ball through Mushow’s legs, directly to DePalma, the single setback. DePalma rolled right while Mushow snuck out to the left to receive the pass and take it down the sideline for the touchdown that put the Chargers ahead to stay.

“That’s stuff we work on at practice and execute,” said DePalma, a pitcher in baseball season who got a chance to show off his arm. “Coach Gabriel is going to be pumped up about that.”

Wormuth made it 17-3 at the quarter when he scored on a 53-yard run with 1:50 left. He took an inside run to the left sideline, stumbled near the end, but extended the ball over the goal line as he went to the ground.

Carbondale held Susquehanna and forced a punt, but Spencer Beamer’s 37-yarder left the Chargers pinned at their 5.

Auston Harvey forced a fumble on the first play and Beamer was there to cover it at the 1.

DeLousia scored from there on the next play, cutting the deficit to 17-12 with 9:13 left in the half.

Carbondale scored on consecutive offensive plays to make it 31-12 at halftime.

Susquehanna drove to the Carbondale 16, with the help of a 32-yard run by Brad Cottrell, to open the second half.

Reams intercepted in the end zone and, this time, being pinned at the 1 was no problem for the Chargers.

On third down, Carbondale faked a jet sweep and instead handed to DePalma who flew up the middle for a 94-yard touchdown.

DeLousia’s 51-yard kickoff return led to a 38-yard pass from Colton Stone to J.J. Rosa on fourth-and-eight for Susquehanna as the offenses heated up.

That came in a middle of a stretch of three touchdowns in less than four minutes, resulting in Carbondale’s 45-18 lead after three quarters. The last score in that stretch came when Reams scored from the 2 after DePalma went 47 yards on the only time he was tackled in the second half.

Stone launched the ball more than 50 yards in the air for a 49-yard gain to Rosa on the last play of the third quarter and followed it up with a 6-yard touchdown pass to DeLousia moving across the back of the end zone on fourth and goal.

Any thoughts of the Sabers using that to launch a comeback evaporated on the next play.

DePalma went around left end and wound up reaching the right corner of the end zone on a 63-yard touchdown.

That score put the Chargers over 50 points and, with subs mixing in, Carbondale threatened again, reaching the 30 before giving the ball up on downs.