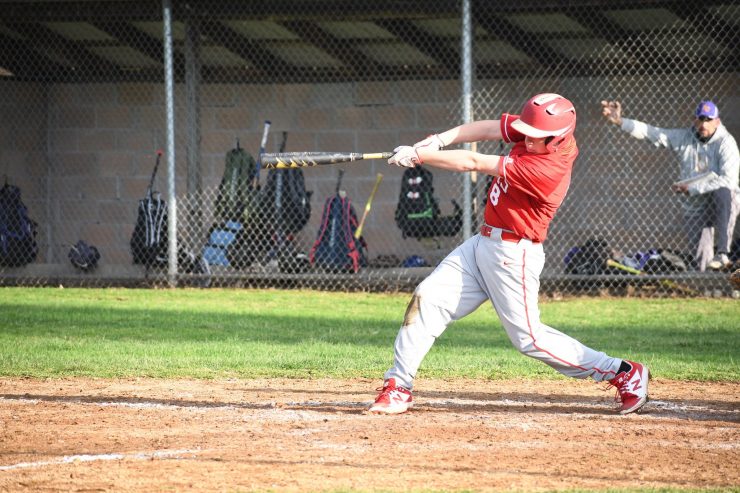 Wyatt Peifer homered, drove in three runs and got the save on the mound Saturday when Wallenpaupack handed North Pocono its first Lackawanna League baseball loss, 7-6, in the process extending the Division 2 race.

The Trojans went to Wallenpaupack for the morning start with a chance to clinch the title.

Wallenpaupack took a 4-1 lead after one inning.

North Pocono scored four times in the fourth to move in front, 5-4. The Trojans stretched the lead to two runs in the top of the sixth before the Buckhorns won the game with three runs in the bottom of the inning.

Peifer had two hits and scored twice. He threw a scoreless seventh inning despite giving up two hits.

Jordan Santiago tripled and drove in three runs in the win. Ben Falgie and Jack Holbert had two hits each while Jack Smith scored twice.

Ryan Ruddy, who scored twice, and Jake Millan each had two hits and scored a run.

Luke Leventhal threw a one-hitter with 12 strikeouts as Lackawanna Trail clinched at least a tie for the Lackawanna Division 4 title with an 11-0, six-inning shutout at Montrose.

Blue Ridge and Elk Lake are still in contention for a tie for first place.

Blue Ridge broke a second-place tie when it held off Mountain View, 10-6.

The Eagles scored three times in the bottom of the seventh before their rally fell short.

The Raiders are one game behind with one to play while Elk Lake is 1½ back with two games remaining.

Emma Conte, Sophia Mandarino and Morgan Quinn drove in runs in the top of the 11th.

Mid Valley ended the league season with a 13-1 record. The Spartanettes outscored their other opponents, 115-12, in 12 league games, but were outscored by Dunmore, which is tied for third place, 11-10.

Madison Kizer and Maranda Runco hit back-to-back, second-inning homers for the Spartanettes. Kizer’s was a two-run shot. Runco has homers in 9 straight games, giving her 16 total on the season.

North Pocono moved into a tie for first place with Honesdale in Lackawanna Division 2 by defeating Wallenpaupack, 4-2.

Bella Giardina went 5-for-5 with three RBI to lead Pittston Area to a 16-6 WVC Division 1 victory over Wyoming Valley West in six innings.

The Lady Patriots scored 11 runs in the first three innings, then clinched the game on the 10-run rule with their last three runs in the bottom of the sixth.

Bernadette Lieback, Maura Mihalka and Nikki Dennis also had three hits while Skylar Borthwick also drove in three runs. One of Mihalka’s hits was a triple.

Will Soma scored three goals and four teammates added two each as North Pocono defeated Lakeland, 13-3, in a WVC game.

Aiden Evans, one of the players with two goals, had a game-high four assists.