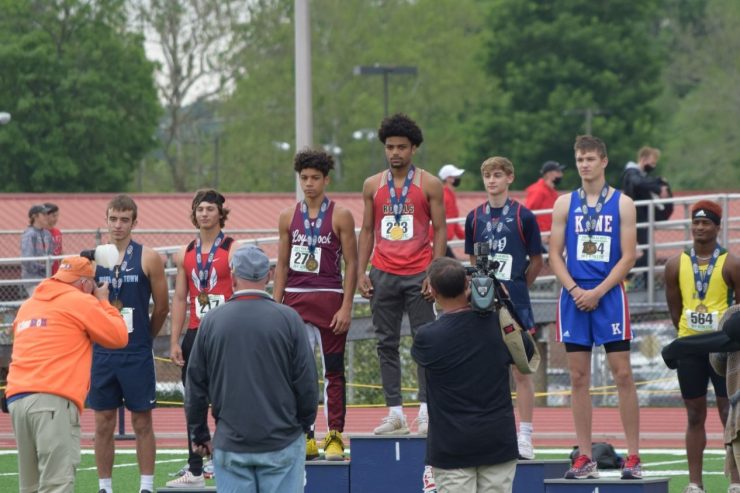 SHIPPENSBURG – Next year, Justice Shoats may give the triple jump a try.

Shoats became a state champion in the long jump in his first year in the sport of track and field when he led a group of 14 medal-winning boys efforts from District 2 May 28 at the Pennsylvania Interscholastic Athletic Association Championships at Shippensburg University.

In just his seventh competitive meet in the event, Shoats jumped 22-9½ to win the state title over a familiar opponent.

Riverside’s Brandon Reed placed second with a jump of 21-9¼ for one of three silver-medal efforts by district athletes. The others were turned in by distance runner Chris Hines, Shoats’ teammate, and javelin thrower Thomas Dickinson, who led four Scranton Prep finishes in the top three to help the Cavaliers wind up second in the team race.

It was the newcomer to the sport, Shoats, who provided District 2’s only gold medal, boys or girls, on the opening day of the state championships.

Shoats went into the state meet seeded 10th and Reed was tied for 20th in a field of 26 jumpers before pulling off their surprise 1-2 finish.

“I did not expect this at all,” said Shoats, a junior who is a two-time, all-District 2 selection by NEPABasketball.com and was the Wyoming Valley Conference Division 2 Player of the Year as a sophomore. “It’s a great accomplishment.

“ … My goal coming down here was just to place. I just wanted to get a medal. I did not think I was going to come in first, but I did.”

Reed, an all-state soccer and basketball player, had battled Shoats head-to-head when their schools met for the 2020 District 2 Class 3A basketball championship at Mohegan Sun Arena. He said he was not surprised by Shoats’ jumping ability.

The big finish made Shoats’ decision to combine high school track and field with playing AAU basketball for the NEPA Elite Coyle 17U team this spring pay off.

“I’ve been looking at track and field since freshman year, but I never actually came out,” said Shoats, who broke Owen Wignot’s Holy Redeemer long jump record and became the first state champion in the sport from either Holy Redeemer or its predecessor, Bishop Hoban. “My friends, my coaches, contacted me and got me to finally do it.”

The next move was deciding which events could best show off the athletic ability that has made Shoats so difficult to contain on the basketball court.

“I knew I could sprint, but also I knew I could jump really high,” Shoats said, “so I was thinking more the jumping events for track.”

At Shippensburg, Shoats broke for the first time ever on his first attempt, but recovered to surpass 22 feet and take the lead on his second try. The official winning jump came next as he extended his lead going into the final three jumps.

While Shoats is starting up a new sporting venture that he said will probably include the triple jump next spring, Reed was competing in his final high school event.

“It’s my senior year,” Reed said. “The most important thing my parents and coaches told me was just to come out and enjoy the atmosphere and have fun.”

Reed led Riverside to Lackawanna League Division 3 and District 2 Class 3A basketball championships as part of a dream senior year across multiple sports.

“It’s an unbelievable ending to an outstanding high school career,” Reed said. “It’s been the time of my life.”

Hine finished strong, closing the gap on state champion Luke Miller from Jenkintown by running the fastest final lap in the field of 24 runners in the first medal event of the day, 3200-meter run.

There were two fifth-place finishers.

Sophomore Drew Mruk in the javelin had one of two medals by Wyoming Area, the other coming on an eighth-place finish by Nico Sciandra in the 300 hurdles.

Kevin Jumper from Holy Cross joined Hine and gave District 2 two of the top five finishers in the 3200.

Kyle Marcinkevich, part of the medal-winning Mid Valley relay team, just missed an individual medal. He placed ninth, missing by one place and 13-hundredths of a second after placing second of eight in his heat.