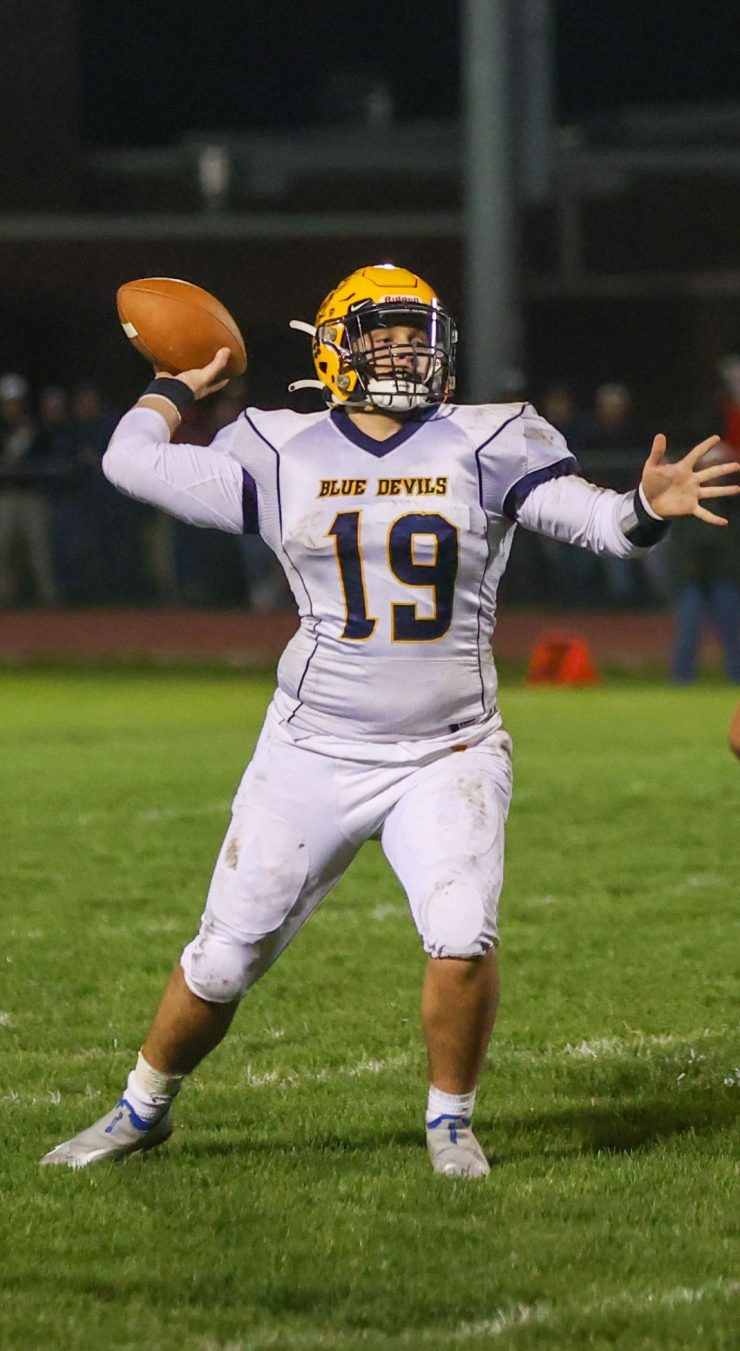 Old Forge quarterback James Sobol accounted for 192 yards and 4 touchdowns in the first half Friday night as the Blue Devils, ranked first in the state in Class A, stormed into the Pennsylvania Interscholastic Athletic Association state tournament by pounding visiting Belmont Charter, 55-14, in the District 1-2-12 Subregional championship game.

PennLive.com has Old Forge ranked first in the state. The Blue Devils (10-0) advance to host Williams Valley, which defeated Tri-Valley, 28-13, in the District 11 championship game.

Sobol did all his passing and running in the first half when the Blue Devils took a 41-6 lead, setting up the entire second half to be played under the Mercy Rule. He was 6-for-10 for 104 yards and 3 touchdowns passing while carrying 8 times for 88 yards and a touchdown.

Old Forge led 20-0 with 4:25 still remaining in the first quarter and 55-6 going into the fourth quarter.

John Greenfield opened the scoring on a 1-yard run that was set up by Casey Holzman’s 42-yard run.

Holzman later scored on a pass and run along with intercepting a pass in the end zone on the game’s final play.

Ethan Tallo returned a punt 24 yards to the Belmont Charter 8 and Hezekiah Deitz scored from there on the next play. Sobol threw the first of his three touchdown passes, covering 24 yards to Andrew Bartnikowski for the 20-0 lead.

Sobol went 13 yards for his rushing touchdown and a 28-0 lead midway through the second quarter.

Belmont Charter finished the first half 2-for-13 passing with 2 interceptions, but it did connect with a 75-yard touchdown pass after Sobol’s touchdown run.

Old Forge came right back with Sobol hitting Mario Samony for a 44-yard touchdown. He added a 4-yard pass to Holzman for the 35-point halftime lead.

On a night when seven different Old Forge players had touchdowns, Holzman became the only Blue Devil to score twice when he ran 48 yards for a touchdown less than three minutes into the second half.

Keory Berrien’s 5-yard run made it 55-6 heading to the fourth quarter.