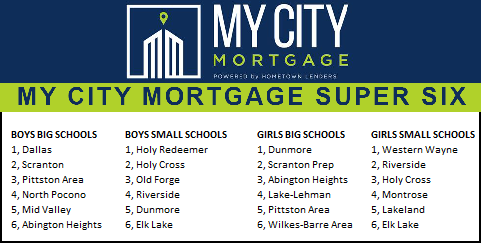 Two 1-vs.-2 girls battles ahead

The top two teams in all four sets of rankings and the top four in three sets remained the same through the first week of District 2 basketball tournament play.

Those early results also set up 1-vs.-2 championship battles in both Big School and Small School girls, according to the latest My City Mortgage Super Six Power Rankings of District 2 basketball teams that were released Sunday evening on our partner website, NEPABasketball.com.

Dunmore and Scranton Prep will play Thursday at 6 p.m. in the Class 4A girls final, one of 11 scheduled for Mohegan Sun Arena at Casey Plaza. Dunmore has been the No. 1 Big School girls team every week of the season while Scranton Prep has been No. 2 most weeks.

Small School No. 1 Western Wayne and No. 2 Riverside will play Saturday at noon in the Class 3A girls final. Those teams have been 1-2, in either order, every week of the season.

Dunmore, Scranton Prep, Western Wayne and Riverside won their seven district quarterfinal and semifinal games by an average of 35 points. The only game decided by less than 20 points was Scranton Prep’s comfortable, 44-28 semifinal victory over then No. 3 Lake-Lehman.

Eight of the arena championship games – four boys and four girls – will send ranked teams against each other.

Dallas will face Mid Valley, which moved up one spot to fifth, in Class 4A.

Pittston Area and North Pocono will play in the Class 5A final.

Abington Heights was eliminated, but moved into the rankings in sixth.

Hazleton Area, previously ranked fifth, lost to Williamsport in the District 2-4 Class 6A Subregional semifinal. Williamsport, from District 4, will play Scranton for the subregional title.

All six Small School boys teams remained the same, including No. 1 Holy Redeemer and its Class 3A final opponent, No. 4 Riverside. Second-ranked Holy Cross and third-ranked Old Forge will meet in Class 2A.

Dunmore and Elk Lake were eliminated, but remained in the fifth and sixth spots.

Abington Heights climbed in the Big School girls rankings, swapping places with Lake-Lehman when it moved up from fourth to third, after beating North Pocono (53-25) and Dallas (55-32). The Lady Comets will play fifth-ranked Pittston Area in the Class 5A final.

Wilkes-Barre Area, which will play Monday in a Class 6A semifinal, remains sixth.

No. 4 Lake-Lehman still has a shot to reach the state tournament through a Tuesday third-place game in Class 4A against Nanticoke.

The top five in Small School girls remained the same.

The third-ranked Lady Crusaders will play in the Class 2A final against Elk Lake, which replaced Mid Valley in the sixth spot.