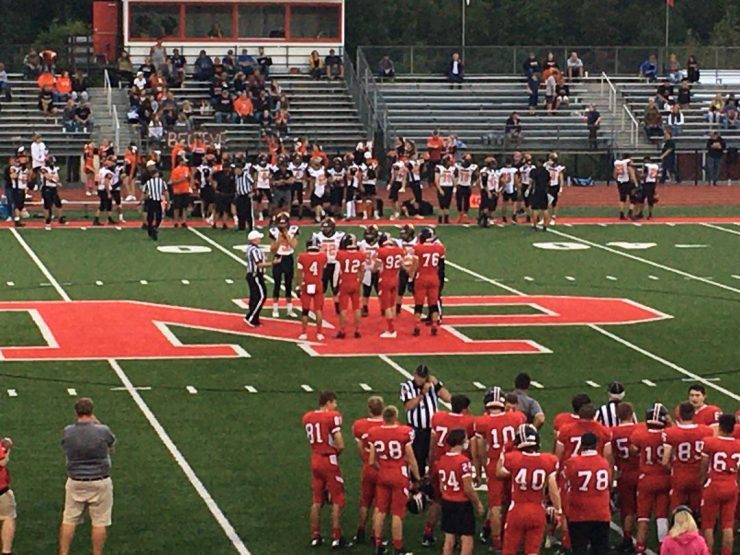 Then, it went through the Tunkhannock defense.

Both approaches were effective Friday night as the Trojans completed their scoring with 7:41 left in the third quarter of a 47-7 rout of the visiting Tigers in a non-league football between teams that came into the game with 2-1 records.

The records may have said the teams were equals, but North Pocono’s offense said otherwise, scoring on its first six possessions while the defense was also producing a score and shutting down Tunkhannock. The Tigers got their only touchdown on a kickoff return.

“We really had to work on protecting our quarterback and I thought we did a good job of doing that.”

With Will Soma showing off a strong and accurate arm and a trio of receivers displaying athleticism in catching the ball and then running with it, North Pocono had 160 yards through the air despite not attempting another pass after the three-minute mark of the second quarter.

By then, the running game had kicked in. Mike Blaine turned 5 second-quarter carries into 95 yards and ripped off runs of 15 and 10 in his only attempts of the second half before sitting down for the night.

“It starts up front with our offensive line and then, I think Will make’s good choices and we have some playmakers,” Dolhon said. “ … They’re really good athletes and they work really hard. Coach Evan Prall works with them and I have to say he has made a tremendous impact with our wide receivers.”

Blaine, who rushed for 155 yards on 13 carries, scored his touchdown on an interception return while three teammates reached the end zone on the ground.

“No other team had really passed on them, but we just caught them and the guys got the job done,” Blaine said. “We started out doing play action and then we went right to the run game and we just ran right through them.

“Shout out to our O-line, everyone made it happen.”

Dan Smith led the receivers with 3 catches for 76 yards, including the first which he turned into a 44-yard touchdown on the game’s fourth play. Smith caught the ball on a hook pattern to the right side, sidestepped a potential tackler and took off for the end zone.

Tunkhannock held the ball for 4½ minutes and pinned North Pocono at the 5 with a punt, but that did not matter.

Soma took a hit in the end zone and Smith made a sliding catch on a deep slant for a 19-yard gain on the first play. That connection started an 11-play, 95-yard scoring drive that culminated in Soma rolling to his right on fourth down and finding Ty LaFave for a 3-yard touchdown.

The score came on the first play of a second quarter that wound up featuring five touchdowns, including Tunkhannock’s only score.

The Tigers got back within 13-7 when Garrett Yuhas returned the ensuing kickoff 85 yards for a touchdown.

North Pocono used three more touchdowns in a span of 9:16 to take a 34-7 halftime lead.

Riley Moore answered the Tunkhannock touchdown with a 47-yard kickoff return and Blaine went 36 yards to the 3 on the next play.

Korry Eisley scored from the 1 with 10:37 still remaining in the half.

A short punt set up North Pocono in Tunkhannock territory and the Trojans scored again in three plays. Ashton Smith went up over a defender in the right corner to pull in a 26-yard touchdown pass.

Soma intercepted a pass to give the Trojans the time they needed to add one more score before halftime.

The drive began with Soma completing his last pass of a 7-for-9 effort for 160 yards and 3 touchdowns, connecting with Dan Smith for 13 yards.

Blaine took a pitch around the left end for 46 yards to the 6 on the next play.

Soma scored from a foot away on fourth-and-goal.

North Pocono broke the game open and sent it into the Mercy Rule with two touchdowns in the first 4:19 of the second half.

Tunkhannock’s first play of the half was a pass toward the sideline on a stop pattern. The ball caromed off the receiver and into the air where Blaine picked it off for and went in for a 24-yard touchdown.

“It was a nice little stop and it’s my job to come up and hit him,” Blaine said. “The ball fell right into my hands.”

North Pocono’s first five offensive plays of the half resulted in 81 yards and Kevin Wickizer took his first carry 42 yards for a touchdown.

The Trojans will take a 3-1 record into their Lackawanna Football Conference Division 1 opener at Wallenpaupack (2-2) next weekend.

“This really gives a confidence booster,” Blaine said. “Everyone thought it was going to be a close game, but on to Wallenpaupack now.”