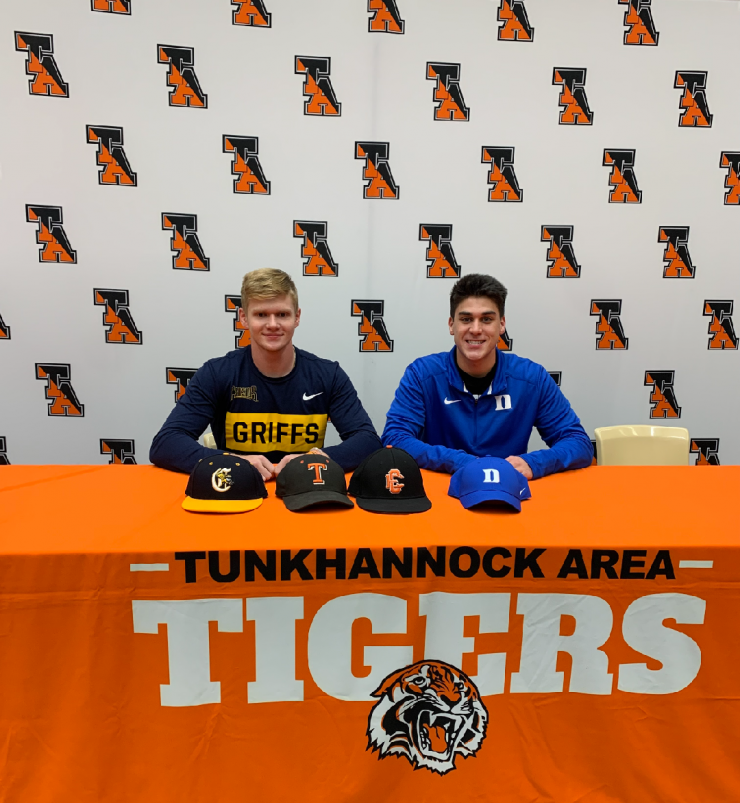 Last spring, Prebola had some of the nation’s longest javelin throws and wound up second in the state in Class 3A at the Pennsylvania Interscholastic Athletic Association Track and Field Championships.

Sheridan was Tunkhannock’s top pitcher and its leader in several batting categories.

Prebola will be on a pre-med path at Duke where the recruiting process included scholarship incentives that will be based on his performance. He also had offers from Brown, Princeton, Stanford and Wake Forest, each of which joined Duke as the schools to which he made official visits. He was also recruited by Cornell, Harvard, North Carolina and Penn.

“I always wanted a high academic and athletic program, which I knew Duke had, but what really stood out was that it was really welcoming,” Prebola said. “I felt very comfortable with the team.

“I thought the coaches were amazing people. All of those things combined, I was just really comfortable, I would use that word there.”

Prebola went to Duke on his own during the summer, then made it the last of his official visits Oct. 8. He let the coaches there know he would accept their offer in mid-October, but withheld public announcement until late in the month in order to contact the other schools that had expressed interest.

“I was able to get on campus this summer toward the end of July and I fell in love with it,” Prebola said.

Prebola continued competing and training through the summer, including a camp in Sioux Falls, S.D. in August. He has since taking a break from throwing while trying to get stronger.

Sheridan has remained friends with Tyler Hoover, a Canisius pitcher who was his teammate with the East Coast Sandhogs, a travel team in Scranton.

“I played with him last year as he was getting recruited,” Sheridan said. “That’s when they started to look into me and learn more about me.”

After the Canisius coaches saw Sheridan in a fall game in New Jersey they reached out and the recruiting process intensified.

“It was a relatively short amount of time from then to when I made my decision,” said Sheridan, who said the coaches know he can pitch, but he has been recruited for his play at catcher.

Sheridan also considered the University of Pittsburgh where he has attended baseball camp and gone on an unofficial visit.

Catcher is the position Sheridan has always played and enjoyed.

“I love being in the action,” said Sheridan, who plans to major in exercise science. “I love commanding the field. … I love everything with catching.

“I work hard at that position, so I take pride of whether it’s just the little things, whether it’s stealing a pitch by framing, having a nice block to save a run or throwing a kid out stealing.”

Switzer among four D-I signees from state contenders at WA