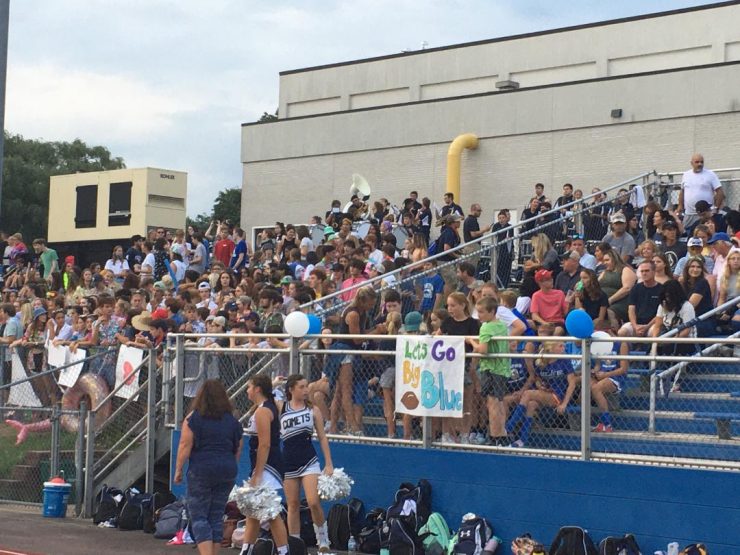 CLARKS SUMMIT – Christian Henzes and Jack Burke led the way Friday night as the Abington Heights defense posted a shutout when the Comets returned to action with an historic, 16-0 victory over visiting Tunkhannock.

The Comets, who sat out the 2020 season for pandemic-related precautions imposed by the school administration, were also playing the first home night game in school history. The game was played at the new artificial turf field at the high school.

The Tigers ran 54 offensive plays, gained 236 yards and picked up 13 first downs, but they only reached the Red Zone once and the only snap they took inside the 10 was to attempt a field goal in the last minute of the third quarter.

Henzes, a junior safety, made four tackles, assisted on four others and turned an interception into a long return that set up the game-breaking touchdown.

Burke, a junior end, had two sacks among his six tackles and assisted on another stop.

Henzes and Burke had plenty of support from their defensive teammates and the offense made up for inconsistencies with a series of big plays in an all-or-nothing type of night. Abington Heights had 8 incomplete passes, 6 runs for no gain and 4 others that lost yardage among its 39 offensive plays.

Fullback/linebacker Nick Deremer made five tackles and assisted on three others. The senior ran 19 yards for a fourth-quarter touchdown on the first play after a 37-yard interception return by Henzes.

Sophomore Linebacker Austin Boersma had four tackles and three assists. Boersma and Burke had consecutive tackles for losses in the Red Zone with Tunkhannock threatening to cut into a 9-0 deficit late in the third quarter.

Cole Reese, a 320-pound junior defensive tackle, had four tackles and an assist. Two of his tackles were for losses and another was for no gain on fourth-and-inches immediately after a second-quarter lightning delay that lasted 1:42.

Roman Cutrufello, a junior defensive back, had four tackles and an assist with one of his tackles for an eight-yard loss.

Mixed with its unproductive offensive plays, Abington Heights also managed passes of 77 and 34 yards and runs of 45, 42 and 39 yards to wind up with 295 yards total offense.

Tunkhannock had picked up two first downs and was approaching midfield when P.T. Cutrufello intercepted a pass that caromed high off the hands of a Tigers receiver less than four minutes into the game.

On the first offensive play, sophomore Caleb Marzolino ran for 42 yards to the Tunkhannock 25. Marzolino seemed to be on his way down, but rolled off a defender without ever being taken to the ground and came out of the spin and into a sprint down the right side.

The Tigers held there, but Michael Hartshorn drilled a 37-yard field goal for a 3-0 lead with 6:22 left in the first quarter.

After picking up 47 yards on 2 runs to begin the game, the Comets gained just 4 on the next 8 plays before striking again in the closing seconds of the first quarter.

P.T. Cutrufello connected with Matt Show on a 77-yard touchdown pass that left the Tigers stunned and put the Comets in front, 9-0.

Show went low to catch a short pass over the middle on third-and-nine. The defender closest to him stopped, appearing to think that the ball had hit the ground or Show’s knee had touched. But Show popped up quickly and took off for a touchdown that the Tunkhannock coaching staff strongly debated, including picking up a 15-yard penalty as Show was completing his race to the end zone.

The penalty, stepped off on the kickoff, helped Abington Heights pin Tunkhannock inside the 10.

The Tigers, however, worked their way out with Ben Chilson hitting 5 of 6 passes for 55 yards.

As Tunkhannock prepared to go for fourth-and-seven at the Abington Heights 29, the game was stopped for lightning.

Following a delay of more than 100 minutes, the teams took the field and immediately produced another play that left Tunkhannock frustrated.

Chilson hit Michael Sickler on a pass that Sickler took all the way to the 1.

An illegal block down field, however, negated part of the catch. When the penalty was stepped off, the Tigers wound up short of the first down by less than a foot at 23.

Given another crack at fourth down because the penalty occurred during the play, the Tigers could not convert as Reese and Nico Bossi led the surge that stuffed a quarterback sneak attempt.

Chilson, who finished 14-for-23 for 161 yards on a night when the majority of his incompletions reached his receiver’s hands, completed 4 more passes for 37 yards on a 15-play, third-quarter drive that ended in the missed field goal with 22.2 seconds left.

With a nine-point lead to protect after being outgained for three quarters, Abington Heights dominated the fourth quarter to secure the victory.

The Comets outgained the Tigers, 108-49, in the fourth quarter and pushed the ball to the 22 and 31 in addition to the touchdown. They had an apparent 70-yard Declan Walsh touchdown run wiped out by a penalty well into the run that cut the net gain of the play in half.

Marzolino led the Abington Heights ground game with 60 yards on 9 carries while Walsh had 56 on 5.

Garrett Yuhas and Sickler each finished with four catches for 51 yards for Tunkhannock.