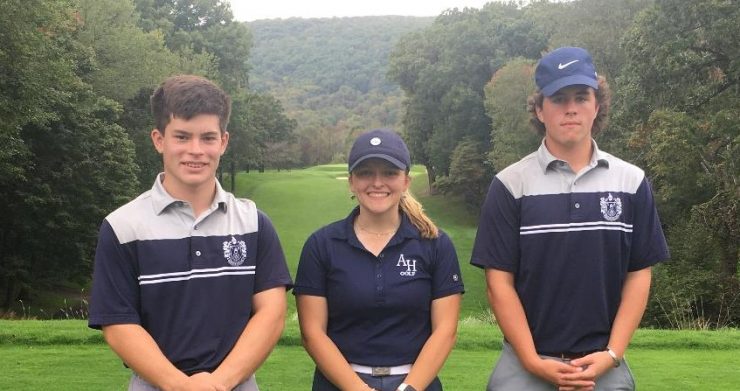 Comets have 3 at state tourney

The Dallas boys and Scranton Prep girls will make the trip to Heritage Hills Golf Resort in York for next week’s team tournament, but for this week, Abington Heights is the most represented school from District 2 at the Pennsylvania Interscholastic Athletic Association Golf Championships.

Abington Heights has two boys and one girls in Tuesday’s Class 3A tournaments, each a senior and each playing in PIAA state championships for the first time as an individual qualifier.

“I was a district qualifier all four years of high school, but I fell a little bit short,” Franchetti said. “It just feels incredible to finally follow through with my qualification to states.”

Flickinger and Marion have made the trip before, when Abington Heights played in the team championships. Flickinger shot a team-best 77 at Heritage Hills last year when the Comets finished fifth in the state in Class 3A.

Abington Heights had already been eliminated from the possibility of a return trip as a team when they extended their high school golf careers. The top four advance from the Class 3A boys individual tournament and Flickinger and Marion grabbed the third and fourth spots by shooting 73 and 74.

“It felt pretty good to see the number up there,” said Flickinger, who relied on a strong putting day and playing the stretch from 1 through 10 in 2-under.

Flickinger was fourth a year ago when only three state spots were available.

“It feels good to get down there,” he said of the state trip.

While Flickinger got into the lead, put it in “cruise control” and held on, Marion had some late work to do to get the Heritage Hills.

“When I finished my front nine, there were a couple of good scores up there (on the scoreboard), so I really had to tune in and make some shots,” Marion said.

Marion did just that with an eagle on the par-5, 14th where he hit a 4-iron to six feet from 230 yards, then rolled in a downhill putt. That came immediately after a double bogey on 13, the 15th of his 18 holes in a shot-gun start, had threatened to knock him out of the state trip.

“That was a little turn of events,” he said. “I got two shots back there.”

Marion just missed a birdie putt after the eagle, “but that turned out to be a good par,” he said after beating Hazleton Area’s Jacob Palermo out of the last spot by a stroke.

Franchetti had two birdies, holing out from the sand on 7, then following up a double bogey on 2 with a birdie on the par-3, third hole.